The crazy life of the ClarkClan. Living a life of grace through Jesus Christ. 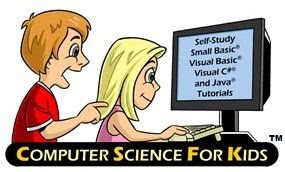 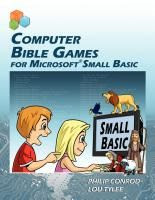 This tutorial will teach students about program design, text window applications, graphics window applications and many other elements of Small Basic language. There are many visual examples included throughout the tutorial so the student knows exactly what to look for while writing their code.

So this review is my observations of watching my husband work with my son, using the Microsoft Small Basic program and the Computer Bible Games Tutorial.

They worked exclusively on my HP laptop computer while using on this program. My husband, Matt, started out by printing out the lessons and putting them in three ring binder. Then he and Ben sat down and started the first lesson. Because Ben is 11, Matt broke  each lesson into two sessions a week, each about an hour and a half to two hours long.  The first lesson consists of a short history behind computers and computer programming language. Matt and Ben had a great time discussing the history. Matt was able to bring his childhood into the lesson as he could tell Ben about using this computer or that one while growing up and helping his dad at the family store. The second day of lesson 1 involved downloading and installing Small Basic.

Each lesson went in about the same manner as the first. Matt and Ben would sit down at the table with the computer, open the binder with the printed tutorial, and start following the lesson. The lesson begins with an overview, then the meat of the lesson and finally a summary.

Matt and Ben were able to work through lesson 5 during the review period. Here are some  thoughts from Matt about the tutorial.

“This program was very well laid out and easy to implement. While I sat with Ben for each lesson, he was able to read and understand the lessons on his own. Being able to see on paper, exactly what Ben would see on the computer was the main reason Ben could be successful using the program.”

I, Mom, was impressed at how much Ben learned and used during this review. He must have been hungry for computer knowledge, because he talked about it during the week and even went back to the programs he wrote and used them again and again.

One of the programs he wrote was a savings calculator. I laugh every time I see Ben go to the computer, open up that program  and then come tell me how much money he will have in 6 months if he saves x number of dollars each month.

I would recommend this program to anyone. I think it is a great program for both kids who know a little about computer programming and kids who do not even realize computers need a specific language to work (like my daughter). We will be continuing with this course until the end of the book as Ben was really enjoying himself and looking forward to learning more.

Many of my Schoolhouse Review Crew Mates also reviewed this program as well as Beginning Microsoft Small Basic. Visit the Crew Blog to read their reviews.